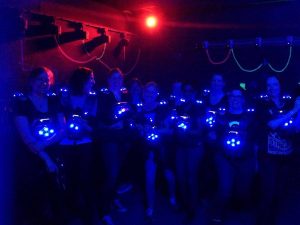 On Saturday 16 April Operation Cyberpaint (#OpCyberpaint): Redteam vs. Blueteam took place in Zoetermeer. We joined the 3rd edition of #OpCyberpaint. The ‘underground event’ brought people together and facilitated a dialogue between ethical hackers, anonymous, IT professionals and various branches of government and commercial organizations engaged in IT security.

During the event our colleagues immediately felt the relaxed atmosphere on the panel discussion, consisting of Godert-Jan van Manen, CTO at Northwave, Rita Verdonk, founder of CVMonitor, Astrid Oosenbrug, Member of Parliament and Pieter Cobelens, former head of the Dutch Military Intelligence and Security Service. A heated debate emerged on whether hackers make the Netherlands more vulnerable, IT security professionals should be screened and whether the Netherlands needs a minister for cyber. In the afternoon the discussion was settled by a red-blue teaming laser game competition. It became clear that the laser game competition was the main reason to be there 😉

Our guys spend the afternoon shooting at peers and had a chance to win. Sadly, they didn’t. After all, it doesn’t matter, they had a lot of fun. Next edition AET will be joining again, and will be present with a larger team!